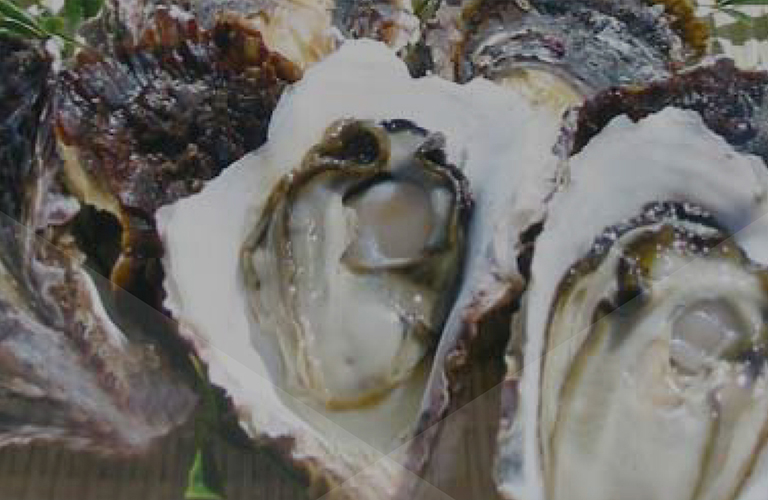 Fruit with the Sweetness of the Sun
Cultivated with Love The Shima area is one of Japan’s leading producers of Hijiki seaweed, an edible brown algae. Shima Hijiki is extremely nutritious as a result of being harvested in the ocean where the Kuroshio Current mixes with nutrient-rich river water. Its stalks are thicker, longer, and have more texture than those of Hijiki seaweed, from other prefectures. In the spring, Hijiki is collected from rocks along the coast where it grows wild. After being dried in the sun, most of the Hijiki seaweed is sent to factories in Ise, where it is processed using a unique traditional steaming process instead of boiling. This process helps to retain the nutrients and Hijiki’s natural robust flavor.

Matoya oysters are cultivated in Matoya Bay, which is fed by the nutrient-rich rivers that flow down from the mountains. The bay is rich in the plankton upon which Pacific oysters feed, so the oysters take one year to reach a size that usually takes two or three. The soft, fluffy meat has a rich sweetness. So that the oysters can be safely eaten raw, they are cleansed in seawater that has been sterilized with ultraviolet rays for 18 hours or longer until all the seawater in their bodies are expelled. 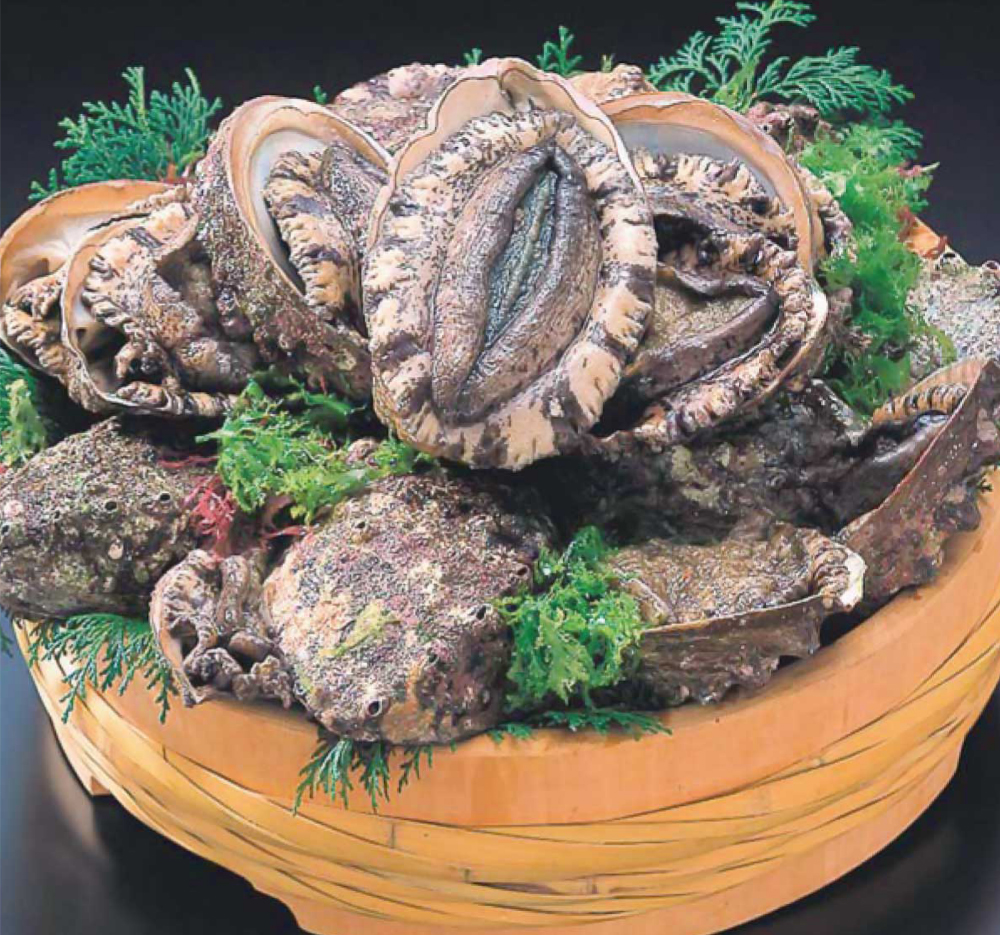 The Toba-Shima region, which is said to be the birthplace of ama diving, is dotted with reefs that create the perfect ocean habitat for abalone, for which the ama have been diving for over 1,000 years. The local ocean, where Ise Bay is fed by nutrient-rich mountain streams and the warm Kuroshio Current, is extremely fertile, making it the perfect home for abalone, which feed on the abundant algae. All the more reason, Mie abalone are meaty, pleasantly chewy, and boast a unique flavor. The ama community strictly limits the length of the diving season and the size of abalone that can be caught in order to protect the natural resources of the entire area.

Rock Oysters are in season in summer, unlike Pacific oysters, which are in season in winter. Considerably larger than Pacific oysters, these delicious oysters are characterized by their creamy taste. In nature, Rock Oysters normally live on the ocean floor far from shore, but cultivation has been made possible by suspending seed oysters in areas off the Toba-Shima coast, where plankton are abundant. The oysters grow quickly, have thin shells, and are quite meaty, making them well worth cultivating. To keep them absolutely safe to eat, the oysters are cleansed in seawater that has been sterilized with ultraviolent rays, and then given a fresh water osmotic pressure treatment at the time of shipping. Anori Tiger Puffers are tiger blowfish weighing over 700 grams that are caught in ocean areas from the Kumano Sea to the Ise Bay and the Sea of Enshu. Born and raised in the nutrient-rich Ise Bay, where they must survive in the fast-flowing Kuroshio Current, Anori fugu are characterized by their firmness and their mouth-watering sweet taste. After they’re caught, the tiger blowfish have their lower teeth carefully cut, so that they don’t harm one another. Mie cooperates with Aichi and Shizuoka in following self-imposed restrictions on the fishing periods and methods, and in requiring the release of tiger blowfish under a certain weight. They also continue to release young blowfish into the wild to keep the population viable. 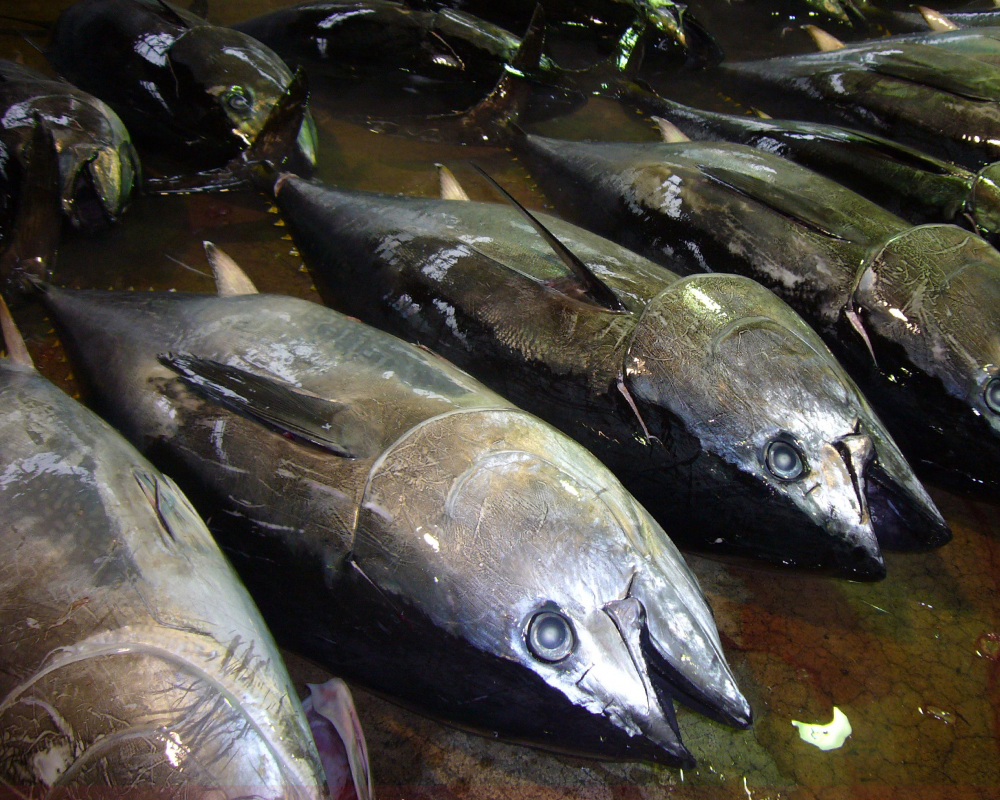 The ultimate in red meat, product of expert skills
High-quality red meat raised in the sanctity of the ocean

Various kinds of tuna are landed in Mie Prefecture, from big-eyed tuna caught out in the open sea to albacore tuna caught in closer waters and Pacific bluefin tuna raised in breeding areas located in the far northeast of Japan. Both the fishermen and the producers are committed to maintaining the freshness of the fish and implement quality control techniques to ensure that the tuna shipped from the prefecture is of the highest quality.

Known as the King of Fish, the red sea bream has long been prized as a bringer of good luck and is essential at weddings, children’s festivals and other celebrations. Red sea bream are caught throughout the year, but it is said that they taste best in spring when they accumulate fat and nutrients in preparation for the breeding season. In Mie, wild sea bream are caught mainly in the Kumanonada Sea, but the flesh of the sea bream caught by single-line fishing at the mouth of Ise Bay is especially firm due to the rapid currents among which the fish live. Red sea bream farming has also been thriving in Mie, so much so that farmed red sea bream that parallels the quality and color of the natural ones can now be farmed with its progressive technology. Mie is the largest producer of sea lettuce in Japan. Cultivation of sea lettuce flourishes between the mouth of Ise Bay and Kumanonada Sea where the nutrient-rich river waters mingle with the warm sea waters of the Kuroshio Current. The sight of the surface of the sea covered in green sea lettuce is a sign that winter has come to the Shima region. Sea lettuce is cultivated with time and care among the gentle waves in the bay, turning a beautiful deep green color as it grows and delivering a pleasing texture and tantalizing aroma of the ocean.

A perfect balance of sweetness and acidity

The optimal cultivation environment for tomatoes that guards against disease and pests was achieved from a desire to provide safe and delicious food. The know-how and efforts of the producers have produced a superb balance of sweetness and acidity. An inviting fragrance that is rich and elegant

Kaorino is a new variety of strawberry developed by Mie Prefecture Agricultural Research Institute over a long period of time. Its key features are large fruit, low acidity and juicy, refreshing sweetness, as well as a rich fragrance. The name comes from its refined fragrance (“kaori” in Japanese).

Nabana refers to the young leaves that appear before the rapeseed plant flowers. Mie takes pride in being the top producer of this vitamin-rich vegetable. Popular for their crisp, crunchy texture

Maekawa-Jiro is a variety of sweet persimmon discovered in Taki, a town in Mie Prefecture. It features an almost square shape, firm texture and sweet flavor.