On a culinary journey: Mie’s changing seasons expressed in sushi.

Rich with nutrients from the mountains, the three Kiso rivers in the north and the Miya River in the south nourish the Ise Bay.

At the same time, the Pacific embraces the deeply indented coastline of southernmost Mie, where nutrients wash down from the mountains and into the sea in this dynamic landscape. 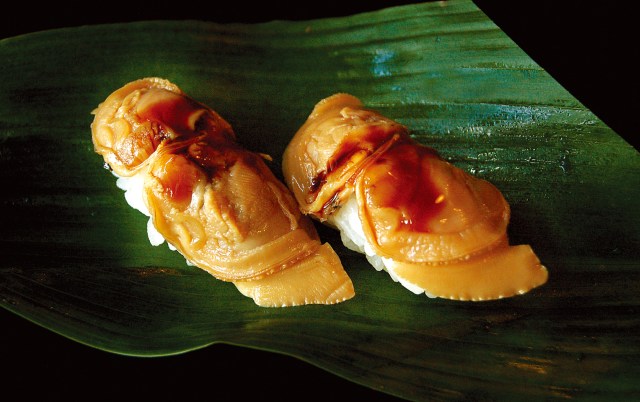 Spring. Spring in Ise Bay brings catches of konago, shirasu, and shiraou (whitebait and sardine fry). In Kuwana, a city in northern Mie, the region’s famous clams are just coming into season. At the peak of the season, all around Mie aosa (seaweed) can be seen draped like green tapestry to dry in the sun.

In Shima, noted in the Manyoshu (an 8th century collection of Japanese poems) as the supplier of sea foods to the Imperial court, the fishing season opens for Mie’s prized awabi (abalone). Thus spring turns into summer. Autumn. Visitors form long lines at the famous oyster shacks of Toba and Shima. The talk is of amadai (tilefish) turning up in fishermen’s nets, and rafters in eastern Kishu are festooned with plump sanma (Japanese mackarelle) hung out to dry. Shorter days herald the coming of winter. 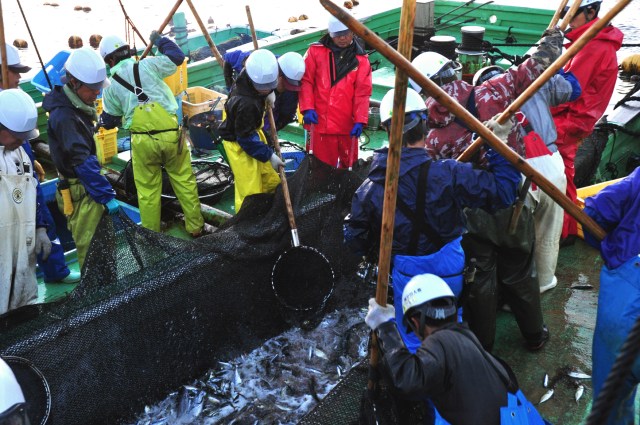 Winter. In Owase, on the Pacific coast, large trawlers haul their rich catches to the small fishing towns that dot the shoreline. Fishermen clamber aboard the boats as cries of “Bait! Bait!” hang white in the cold early morning air. Amongst this clamor a wide variety of fish are brought ashore. Kitsune or hagatsuo (striped bonito) fetch the highest prices. However, the season is closed on the Ise lobster, the pride of Mie. Late into the night the muffled gurgling of diesel engines can be heard echoing across the dark water as the fishing boats head back out to sea.

Winter is fugu season. In Owase and northern Kii, bonito and buri (yelllowtail) start to run up the coast, and soon shirao (whitebait) sushi begins to appear on menus in Kuwana, announcing the arrival of spring. 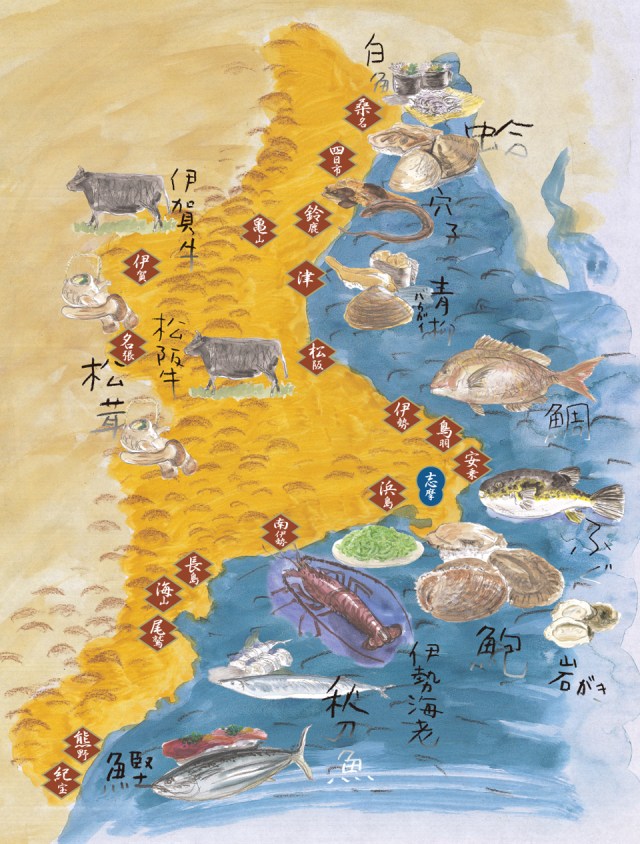 Mie’s long coastline runs from the northern edge of Ise Bay to the Pacific Ocean in the south. Its numerous fishing grounds provide a multitude of local specialties that inspire unique sushi.

From this multitude let us investigate the so-called “Phantom Oyster”, watarigaki oysters. Watarigaki oysters, raised in Kihoku Town, are an autumn delicacy and are often enjoyed as sushi. As recently as ten years ago, these oysters were consumed almost exclusively by locals, their existence unknown to the people of nearby towns. In light of this fact, “phantom oyster” seems a fitting sobriquet indeed. 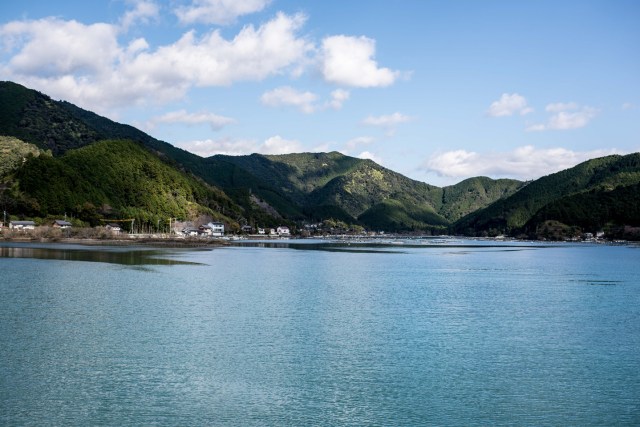 ———“We give our oysters a strict upbringing” 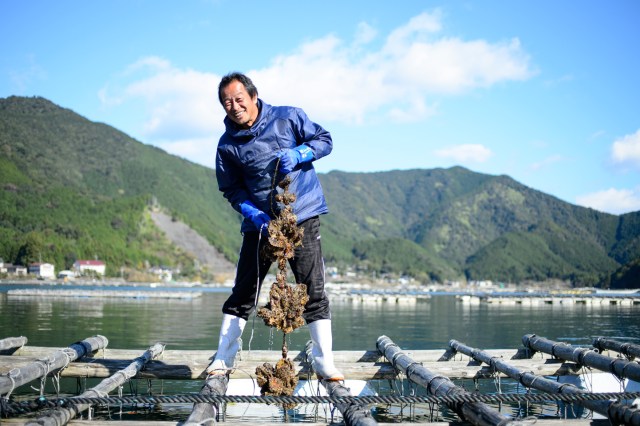 These are the words of Mr. Azechi, who is in charge of watarigaki oyster production in Kihoku. He is the fourth generation president of his seafood production company, which has been in business since 1927.

So what does “giving oysters a strict upbringing” mean? 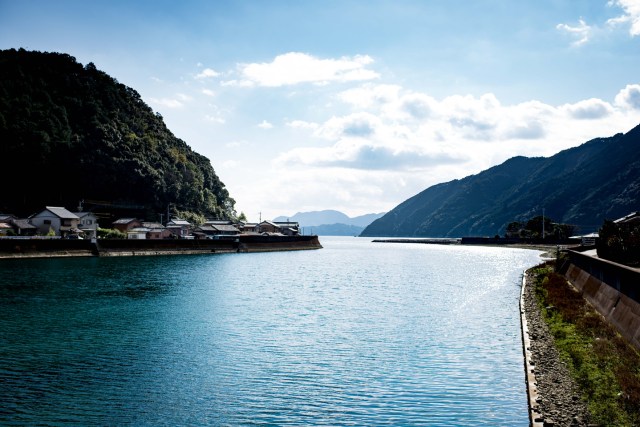 This area gets some of the highest annual rainfall in all of Japan, and is particularly famous for the fury of its rainstorms.

“I can remember, as a junior high student, being caught in a rainstorm and thinking “Ouch, this stuff hurts!”. Hard to believe, isn’t it? If you wore rain boots on rainy days, the water splashing up from the ground would get inside the boots and you’d end up all wet, so we just packed a towel and walked to school in sandals. That’s how hard it would rain.” relates Mr. Azechi. The watarigaki oyster beds are located in Shiraishi Lake, where river waters mingle with the sea. Due to its particular geography, water from the river, the mountains, and the sea collect here. The heavier cold sea water flows underneath the warmer fresh water at the surface. Blended by the action of tides and typhoons, the water is in perfect balance. No doubt it is this extreme environment that sets watarigaki oysters apart from oysters raised in the usual manner. Mr. Azechi continues. “In oyster farming, usually adolescent oysters are brought in from other prefectures and raised, but this is not possible in an extreme environment like Shiraishi Lake. Our oysters must be born and raised in these waters. Only watarigaki oysters have the DNA necessary to survive and thrive here. Our method of oyster farming is quite rare in Mie, I’ve been told.”

It is a bright and clear day. Sitting in his boat, admiring the dynamic scenery while listening to him talk about raising oysters like they were his children, I find myself feeling a little envious of Mr. Azechi. ———Sealed up tight against the harsh environment and brimming with nutrients from mountain and sea, the flavor of these “phantom oysters” is...

“Because watarigaki oysters are raised in this blend of salt and fresh water, they have none of the bitterness found in most oysters. The flesh has a golden hue, which indicates the presence of large amounts of glycogen. This glycogen is what gives watarigaki oysters their rich umami flavor. Because they keep their shells tightly closed, they have an excellent texture as well.” explains Mr. Azechi.

Whatever the reason, even children who hate oysters will happily eat watarigaki oysters.

The flavor is so different from other oysters that people trying watarigaki oysters for the first time are often surprised. “Hm? Is this really an oyster?” is not an uncommon remark.

Eager to discover this difference for myself, I repaired to a nearby sushi shop.

This sushi shop in Kihoku entertains guests from Osaka, Kyoto, and even Tokyo who come in search of watarigaki oysters. 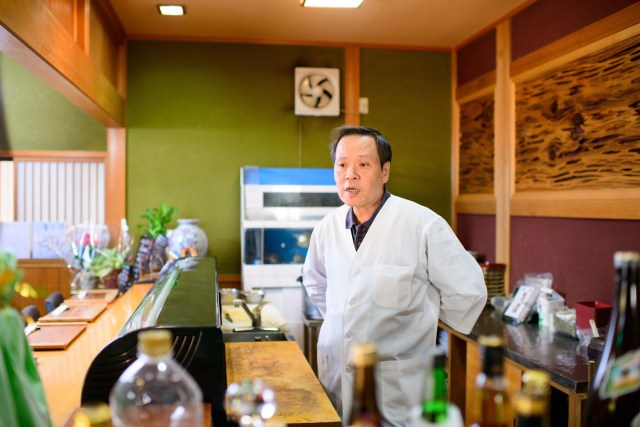 “Folks from other prefectures who come to visit Ise Shrine make their way down here to enjoy a meal.”

So says sushi shop owner Mr. Okamura. With its lunch menu full of local delicacies from this rich landscape, plentiful seating, and neat rows of reserved bottles, this place is obviously loved by the locals as well. Here one can experience the full flavor of the local seafood.

First, I try some raw watarigaki oysters in order to experience their natural flavor.

Usually, when eating multiple raw oysters, it isn’t long before one becomes aware of an unpleasant bitter aftertaste. More than a few people have had the experience of sitting down to a plate of raw oysters but only eating a few before having the rest roasted or fried.

Next up is watarigaki oyster sushi.

A local speciality, watarigaki oysters stewed in a sweet and sour broth and served on vinegared rice have a tang that goes very well with karashi mustard. The lack of bitterness and the tangy sauce help to bring out the deep umami of the oyster. I could easily put away any number of these! Now I see why so many people go out of their way to come here.

I recall an anecdote from Mr. Azechi. “We had some folks from Canada visit, and when they tried watarigaki oysters, they kept saying things like “Clean!” and “Clear!”” he told me.

With no unpleasant aftertaste, no quirks, and a deep umami flavor, word of watarigaki oysters has even reached foreign folks.

———Making the Mountain God Laugh: The Tale of the Sargassum Fish

When paying a visit to a sushi shop, it is a good idea to try some of the other local specialties as well. I took the opportunity to try deep fried sagassum fish, a deep sea dweller often caught in eastern Kishu. As it turns out, in neighboring Owase there is an old folktale in which the sargassum fish plays a prominent part, Mr. Okamura informs me. 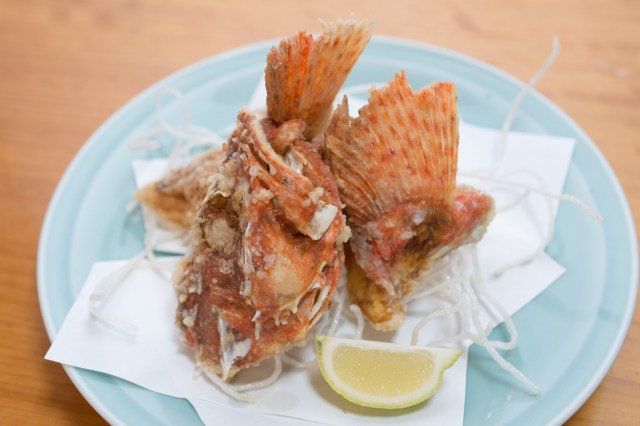 (for the Japanese version of this story please visit https://www.kankomie.or.jp/mMukashi/)

To this day a traditional event is held in Owase every year commemorating this tale.
Making the journey to this place and hearing this story makes a wonderful memory.
As for the taste, winter sargassum fish are firm, flavorful and delicious.

———The Art of Oshizushi

I heard that the sushi shop I visited for this report also operates a lunch counter near the fishing port of Hikimoto in Kaisan township. I took a trip to see it after finishing my report, and found a row of storefronts reminiscent of the 1960s. I heartily recommend having a meal here while soaking up the great retro atmosphere!

Mie’s Connections to Food (with Craftsmen of Cuisine content)
http://www.shoku.pref.mie.lg.jp/jp/contents12.html

Prepared with the cooperation of